Ha! Brent's not the only one in this family with 'skills'. I looked outside the window yesterday, and noticed this bright orange truck parked in the vacant lot next to our house. About 5 guys get out, and start surveying the trees. One came close to the house, so I went out to see what was going on.

He said they were trimming trees away from the power lines. They'd trim the tree in the front yard, and go up the hill to get the neighbors. I said that was fine.

We chatted about trees, and I told him that my dad was a logger. He'd never heard that term before. He said the was going to go and work in Washington. He'd never been there before.

Are there are lot of trees out there? he said.

Oh yah! Anyone who's been to the Pacific Northwest knows what I'm talking about.

Anyway, I ask him what they were doing with the mulch when they were done, and he said we could have it if we wanted! Score it! It was a whole truck load. Now we have TONS of mulch! 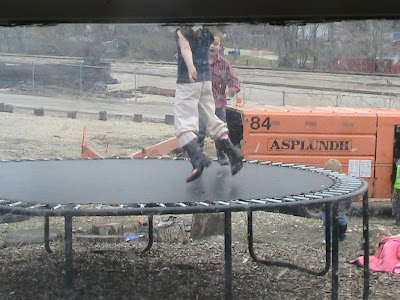 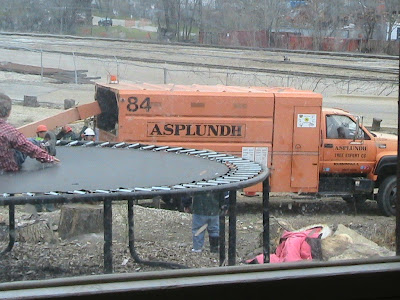 You are truly your mothers daughter! and your grandfathers for that matter! Talking and dealin' Why to go!

we also went in the front yard, and sat on the porch and watched them trim branches. i loved that!

Yes, truly tons of mulch. Too bad we don't have 'ton's of lower back muscle left!! I'm going to need help spreading it all I'm afraid. Time for Jake to get his mulch scooping game on!