The Saddest Face EVER! 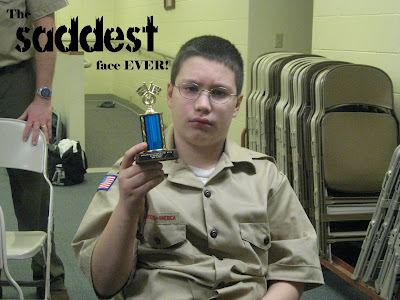 Poor Jacob. He hasn't been feeling right for a while now. One would think, from looking at this pic, that he was disappointed in his trophy. That couldn't be farther from the truth. Thursday and Friday of last week, he was sick. Puking in the toilet, can't stand up 'cause your head's swimming, fever and chills' sick. But, he was better on Saturday, Sunday, Monday, and Tuesday. I guess he was complaining of a sore throat, but it's cold season.

So Wednesday night rolls around, and we go to Church scouts (yes, there is a distinction). He starts feeling sick again. I know that Jacob is sick when his energy level drops to zero, he's cold (that's a big red flag, right there!), and all the color drains out of his face. He just kind of hung out on the side of our meeting, not having enough energy to participate.

This is him getting his trophy from the Pinewood Derby. They were a week late, but better late than never! Anyway, he didn't have a very fun meeting, with him being sick and all. Poor Jacob.

We found out that Maylee Brower had Strep Throat, and I started to wonder if maybe that's what my kids had. I say kids, because that same day, Emeline started to get sick. She started to complain about a sore throat, and started getting chills, and loss of energy. Great. 2 sick kids.

Luckily, Brent was home for the evening, and needed to prepare for his conference the next day. So I left Emeline home with him to relax, and we went to Scouts. If I had known that Jacob was going to be sick too, I'd have left him home with Dad and Eme. Oh well. Who knew?

So, today, I called and made an appointment for the kids at the doctor. The heater guys were here in the AM, and our appointment was at 2:30. Jackson is 45 mintues away, so it was a bit of a drive. We cleaned and tried to make the house presentable for the heater guys (I'm sure they didn't care, but I sure did), did a few hours of school, and headed out to the doctor.

After hearing the symptoms and examining the kids, he said that it sounded like a virus, and not strep, but that he'd go ahead and do the culture anyway. Good thing he did, cause they both tested positive. A mother's instincts are hardly ever wrong.

Then, off to Wal-mart we went. Jacob was so sick by this point, that he just wanted to sit on the bench at the pharmacy. Unfortunately, they said that there was 100 other prescriptions to be filled before mine. Crazy! So, we wandered around Wal-mart for an hour, finding lots of "necessities". Actually, we didn't do bad considering the amount of time we had there.

Then, on home, and quite relaxing time. With 2 sick kids, I decided to let them watch some TV before bed. We'll finish up school on Saturday. I love the flexibility of homeschool!

So, here's to my poor Jacob, and his saddest (and sickest) face ever. We love you, Jacob!

But hey Jake, NOBODY loves you like Aunt Sue does!!!!!!! Get well sweety!

After their first 2 doses of antibiotics, everyone is feeling great and happy again! Yeah, antibiotics :) We were so glad it was a bacteria and not a virus :)

Funny that you stumbled on the boy scout stuff on my blog....b/c I just added it this morning so a friend of mine could get some ideas. I put everything I find on that blog so I don't have to dig for it again. If you have any other suggestions for boy scout digital stuff, sned it my way and I will add it to my blog and give oyu credit. I figure someone out there in internet land should benefit from it all.