Yet Another Bedroom Makeover 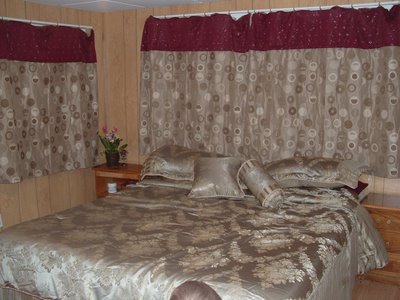 OK, I know I just posted a picture of my bedroom makeover. Well here's the story. I bought a new comforter set from KMart, and liked the pattern, but hated the feeling. It was crunchy, and cheap feeling. But I had just bought purple accessories to match with the bedroom and curtains.

I decided to try and take back the set to KMart, and see if I could return it. I bagged up the ruffel, the sheets (top and bottom), and the pillowcases in big ziplock bags. Then I folded up the comforter and wrapped it in saran wrap. Pretty tricky, eh? Anyway, they took it back, no questions asked. The set was only $40.

Then I went on the hunt for a new set. Brent and I decided that we could spend a little more, for something that would last longer, and feel much better. Jim, Joe, Eme, and I went to Target, KMart, Walmart, Sears, JCPenney, Carson Something, and a few others before we finally decided on the set that we liked. Then at Walmart, we picked out nice fabric for curtains. At KMart, we got some nice accessories. It was quite fun, but the kids were definately ready to be home when it was all said and done.