Hartys at the Iron Works Site 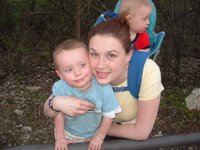 Here are Joe, Mom, and Jim posing
for the camera, while picking up trash at the Joliet Iron Works Historic Site. I manning the camera for this trip, so it is one of the few that we have of me. Joe was quite the camera hog, so it's one of his several pictures! 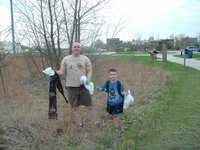 Here is Brent and Tom, posing while picking up trash. Tom was one of our best "picker-upers". I would say that he picked up 60% of the trash that was collected! Way to go Tom. 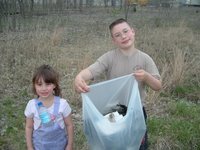 Emeline and Jacob were good helpers also. Jacob held the bag while we all put trash in it the first leg of the walk, then we decided that he would be better put to use collecting the trash. Eme was willing to pick up the trash when we pointed out to her where it was, but she wasn't the best finder. She's just little though! We love you Emeline!