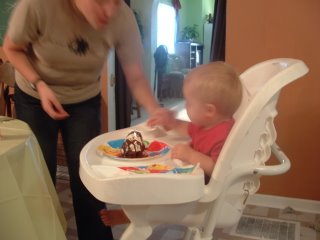 Here's a pic of Jim blowing (ok, so i blew it out) out his candle. Unfortunately, Brent forgot to put on the flash, so all of the pics are blury. He had brownines with ice cream and magic shell topping. Pretty tasty. Actually, he'd just woken up from his nap, and we'd already eaten dinner. We gave him his ice cream first, and he played in it, but really wanted his spaghetti. Poor kid.